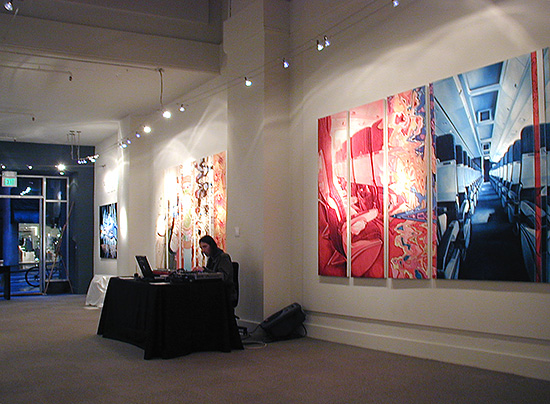 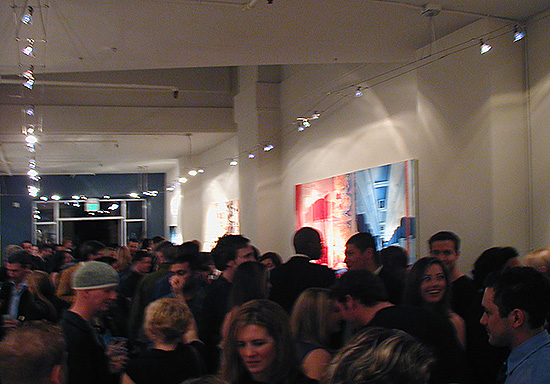 Works in the Exhibition

Ted Vasin's subject matter is his dreams, expressed through a unique artistic process. These lucid paintings of a hypnotic reality are not, however, depicted in any random fashion; on the contrary: Using computer software, Vasin explains these chaotic visions through a system of numbers, then meticulously translates them onto the canvas by hand. His work is a yearning to portray an otherworldly precision that is not, inherently, human; and calls it Mathematical Perfection.

Through masterful paint application, line and color coalesce into a fantasia of dimensions and movement. For example, in the work IDMaker, planes of space shift the eye from the foreground to the background, and back again in a serene and controlled orchestra of movement. It is as though we are looking at a solar system deep in space, or the intricate view of something under a microscope. Here we can only guess at the title's meaning, but this piece is certainly illustrative of Vasin's signature style, and his thumbprint, so to speak, is undeniably unique. Or take the work Fish Trap Inventor, in which the objects depicted actually seem to leave the 2-dimensional canvas, and shards of color explode toward the viewer. The illusion is one of a dramatic event occurring, like a chemical reaction, in which action and change are primary effects. And the surrealistic title leaves the viewer to ponder and reconsider the obvious: That Vasin's world is humorously, and hauntingly, his own.

"Ted's surreal paintings immediately made an impression [on me] as their energyembraced and surrounded my senses. viewing Ted's work was like no other experience I've had."

It is the juxtaposition of mathematical, almost scientific technical precision, together with surrealistic contents and titles that culminates in the richness that is Ted Vasin's oeuvre. The interconnected visual harmonies are part of a world that we are given only a glimpse of. For the viewer's pleasure, Vasin's visual symphony is also accompanied by its respective sound composition-many paintings come with a CD composed by the artist.