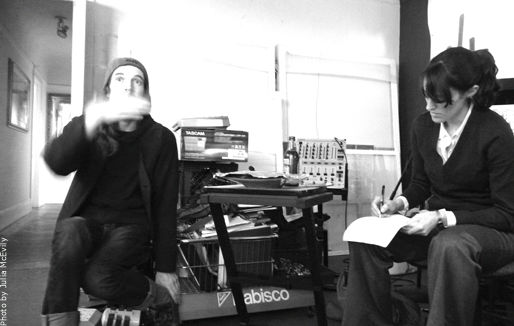 A native of Moscow, Ted Vasin speaks with a Russian accent, but he's the quiet-type anyway. Growing up, his introverted tendancies manifested themselves early:

"I spent most of my time in my room"

With a father as a painter, Vasin began painting at an early age, influenced by the Russian icons collected by his family. He went on to study at the Moscow Art College, which he found comprehensive, if not creatively inspiring:

"I went to school and it was everything about everything. They teach you [...] sculpture and composition and the history of art. Things that actually give you some basic [skills,] but this supposedly limits you after a while and you move on to experiment"

After art school, however, Vasin struggled to assimilate to the Communist regime's notion of an ideal citizen. He delicately refers to these "limitations" as his reasons for ultimately leaving the Soviet Union:

"I [almost went] to jail for not going to work. I have such a personality [that] I just like to spend most of my time by myself and it's considered to be [a] crime. If you're an artist and you don't have an official job anywhere, they threaten to put you in jail. I have a few friends [that] were actually doing time for not being professionals"

Looking for a better life, Vasin left even when visas were still very difficult to get. Not surprisingly, he experienced some culture shock upon arriving in the US:

"I remember when I came [to America for the] first time, I spent like a week in my friend's apartment just watching television all day long"

Eventually, Vasin began creating again, but he didn't restrict himself to visual expression. His gravitation towards stream of consciousness writing reflects his focus on the experience of art, over its messages or documentation:

"I felt this urge to express and I started doing all kinds of things. [...] For example I had a period of time when I was just writing and writing and writing endlessly [...] it was nonsense later on [when] I would read it. It was like automatic writing, but I was totally obsessed with it"

The intensity of Vasin's experience whilst creating certainly extends to his painting. His works serve as a reminder, sometimes painful, of what he was experiencing at the time of its creation:

"When I look back sometimes its hard for me to look at [my paintings]. I feel like I've got to turn away because there's so much at once. I'll have been [away] for six months and then I see in a second the impact."

Perhaps it was his own heightened awareness of emotion that made machines and equipment an interesting subject for many years. Rather than document them as inanimate objects on a landscape, in the late 1990s Vasin made machines the subjects of a kind of portraiture:

"[The] mechanical [nature] of everything, in certain places, is obvious. Like when you're in a suburb, for example [...] the machine itself becomes visible. I was trying to capture this notion of [...] machine personality, like all these machines have character and they're really defined with hard edges and colors"

The idea of exposing the unseen and ignored elements of civilization is interesting to Vasin. He began exploring the idea further with sound, creating sound installations featuring white noise and vibrations:

"There's a beauty in this noise [...] A world appears out of static [...] I would imagine the static that is overlooked because of the fixation on objects that [we] are told [...] are important [...] In the noise there are other worlds, as if you look under the microscope and realize there are other dimensions and worlds. There are bugs [not visible to the naked eye] and they have relationships with each other and their structures [etc.]"

Vasin's fascination with transcending conventional perspectives escalated with his exposure to hallucinogens:

"A friend of mine introduced me to psychedelics and everything changed from that point on. [...] I was processing [that experience] for a long time [...] I guess that is what I was doing in my paintings, trying to balance it and process it"

Indeed, his style began to transform, at first most notably in his color palatte. Shifting from muted, earthy colors, Vasin began to introduce brighter colors. Having only worked with traditional paint mediums of oil, watecolor, and gouache in Russia, Vasin embraced the vibrancy of modern acrylic paint:

"I only first [saw acrylic paint] here and I got so into it because of the colors they have right now, they have this metallic or iridescent quality"

At first, Vasin continued to display elements of realism, mixed with explosive color abstractions. In 2001-02, he created a series in this style comprised of seven pieces with a similar structure (three narrow panels and one wider panel), which introduced narrative elements. Reflecting Vasin's experiential style of creating, the series was unplanned:

"The challenge in that for me is to make it coherent and balanced as a whole piece; to make the whole composition work. I wanted it to be flowing from left to right like a story [...] so I wanted to bring space and time to it"

After that series, Vasin began experimenting with 3D design programs. While he generates digital studies prolifically, only a few make their way onto the canvas, which Vasin still regards as his primary medium:

"I'm trying to experiment with everything. I really appreciate digital stuff and I really enjoy [manipulating] it, but painting on its own will always be the thing. It cannot be compared with anything"

Using the software to mold objects into spontaneous abstractions, in a visual equivalent of stream of consciousness writing, Vasin's work became completely non-representational for a couple years. Again, he was seeking to transcend conventional perception:

"I was so desparate [to] find something that is not mass [produced] or that is so alien that [if I would] show it to you and you would say, 'No, I've never seen it, what is this?' I couldn't find [anything] like this. So, I would experiment, I would just put [random objects] on top of each other and try to create some abstraction"

Vasin became fixated on the notion of an "alien alphabet," or a means of expression that was so transcendant that expression could be pure. The inherent limitations of language drive both his visual work and non-verbal sound installations:

"The alphabet is actually hell in a way [...] because you become a machine in a way when you print all the time [using] the same letters. In other words, you have to go through these rules and slowly these rules take over your uniqueness"